I did it with an old fucking rad oscilloscope, a kaleidoscope lens, old digital camera and with an aspirina pill!

I love this band... i think one of the best in italy right now!

DEAD MOON ONE OF BEST UNKNOW r'n'r band EVER. Stranded in the Mystery Zone one of best r'n'r record ever. 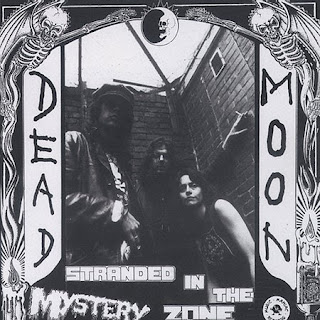 There are so many underrated, yet cherished treasures in Northwest rock music. Take Dead Moon, for instance. Never a household name, they nonetheless inspired adoration and dedication among fans around the world for the almost-20 years they were a band. Thousands more people than have ever heard of Dead Moon have probably heard their songs covered by shitty Pearl Jam.
Doing things completely their own way (to the point of mastering their own vinyl records on the mono lathe that was used to cut “Louie Louie” by the Kingsmen), and never seeming to strive for recognition, the husband-and-wife team set an example for the DIY musicians of the 90s and the 00s.
Dead Moon broke up in their 20th year of being a band, only to almost immediately turn around and form a new band, Pierced Arrows, and go right back to making records and touring.
In their 50s now, Toody and Fred Cole seem to have more energy, drive and dedication than any of the 20- and 30-somethings playing rock music in the NW today.
In 1991, when Stranded in the Mystery Zone was released, Dead Moon were still a relatively new band (only having been together for 4 years and released, uh, six albums) few people understood what kind of masterpiece it was and NW too feew people know it.
It's the record of my summer with other shit of Cheater Slicks and Chrome Cranks.

I see you and hope to meet you some days

tab_ularasa
I MADE VIDEO FOR BANDS THAT I LIKE. I MADE PHOTO/COLLAGE/ZINE. I MADE WEIRD EXPERIMENTAL MUSIC. I PLAY IN 4 BANDS: Trio Banana, duodenum, Centauri, Liutprando. I run with brothers Bubca Records and destroYO Records